Ahti (also known as Entity A-001) is a mysterious paranatural entity and the "janitor" of the Oldest House. Assuming the appearance of an older Finnish man, Ahti appeared without explanation in the Oldest House and has subsequently roamed the building as its "cleaner," while being monitored by the Federal Bureau of Control. He performs tasks that seem menial but are vital to the safety of people within and constantly instructs Jesse Faden to help him. Ahti's actual origins and significance are unknown.

First discovered by Dr. Theodore Ash, Jr. during his expedition into the Foundation, Ahti's presence took Dr. Ash by surprise. He claimed to be the janitor of the Oldest House, confounding Dr. Ash as to how the cleaning crew could be hired down there so quickly. The doctor constantly attempted to interrogate Ahti, but always the janitor eluded him with surprising knowledge of the place. While Ahti is alleged to be its "janitor", in reality, he is an extremely powerful paranatural entity who appeared without explanation and performs seemingly menial duties that are actually vital to the safety of people within the Oldest House. Ahti's origins are wholly unknown, and Bureau agents have struggled to understand him for years. In the Bureau's attempt to film Ahti, they unintentionally created the VHS Cassette Tape Altered Item. Members of the staff sometimes note his presence in restricted areas despite his lack of clearance. However, their concerns are summarily dismissed and they are told to never interrupt Ahti in his day-to-day tasks so the Bureau can continue with their observations.

Ahti himself possesses a number of powers. He is capable of telepathy, directly responding to Jesse's inner conversation with Polaris and constantly conversing with Jesse without being physically present. He can appear anywhere within the Oldest House, and possesses a cassette player capable of navigating the Ashtray Maze, a feat once considered impossible without the Cigarette Object of Power. Aside from Jesse, Ahti is the only individual in the Bureau to resist the Hiss without an HRA.

Ahti seems to be connected in some way to the Foundation, a place where he was first seen and where he described as his "vacation spot," suggesting a connection to the Astral Plane or the Board, or the origins of the Oldest House. After aiding Jesse in subduing the Hiss during the Hiss invasion, Ahti disappeared into the Foundation and has not been seen since. If Jesse completes extra janitorial tasks for Ahti in the Investigations Sector, she will receive a postcard showing Ahti in the town of Watery, Washington, which is described as "America's Little Finland."

Assuming the appearance of a Finnish man, Ahti is an offbeat and somewhat unsettling individual with a nonetheless kindhearted personality. While Jesse sometimes has difficulty understanding him, she trusts him and believes him to be a friendly, welcome face in the Oldest House. He constantly refers to her, even after she has been promoted to the Director, as his "assistant" and assigns her some of his vital tasks, such as restarting the coolant pumps and saving the NSC Plant from meltdown. Through his dialogue, he reveals that he intends to drill Jesse on these tasks before he goes away on "vacation." Jesse's view of Ahti is shared by Simon Arish, who describes Ahti as his "favorite coffee break buddy," mentioning how Ahti apparently has the "craziest stories" . He frequently speaks in Finnish idioms, many of which are literally translated into English regardless of context.

Ahti as seen in the E3 Coleseium Demo. 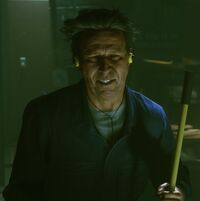