The Arctic Queen is an Altered Item contained by the Federal Bureau of Control in the Oldest House. It is involved in the Fridge Duty mission, wherein it leads Jesse Faden to a fight with the Former.

The Arctic Queen, also referred to simply as the Refrigerator, is an "Arctic Queen" model refrigerator from the 1960s. The door is decorated with 3 crayon drawings by a child named Michael. It is impossible to remove, alter or otherwise damage these illustrations.

It came to the Bureau's attention when it survived the collapse of the New York City Grand Central Hotel on August 3, 1973, with the illustrations on its door left completely intact. It is implied that the refrigerator may even have been the cause of the collapse, which occurred almost immediately after its owner left Michael alone in the hotel to buy groceries. The Arctic Queen remained in the possession of its owner until 1974, when the Bureau purchased it through a false identity.

During the events of the Hiss invasion, the refrigerator is left supervised by Agent Phillip, who was supposedly stuck watching it for over twenty-four hours.

Presumably due to the influence that the Former had on it, the Arctic Queen required constant supervision by a conscious viewer. It was said to behave "erratically" if not calmed by ocular contact. Jesse's contact with the Arctic Queen prior to cleansing it demonstrates that it can remotely harm, with potentially lethal effect, the individual who was last looking at it if they try to look away for any length of time.

During Fridge Duty, before Jesse can succeed in rescuing Philip (presumably due to him failing to continue supervising it), he is killed by the refrigerator. A puddle of blood is left where Philip was seated, and his true demise and what the refrigerator did to him uncertain. 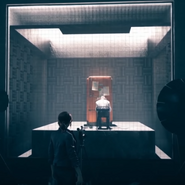