Astral Spikes are mysterious entities found within the Astral Plane, made up of violently shifting and morphing pieces of the type of black and gold marble found in the Astral Plane. It is unknown if they are sentient or driven by base "programming" similar to that of Altered Items, but they are found to travel slowly towards biological organisms within a certain range, shifting more aggressively as if alarmed or angry. Proximity to unsecured inorganic objects results in them gaining an element of weightlessness, causing them to float towards the Spike only to be knocked away by its unpredictable movements. The danger of the Astral Spike comes not only from the violent trajectory of the Spike's mass, but also from a passive wavelength they emit which causes the disruption of organic and inorganic matter within a certain range, the effect of which becomes magnified as the distance closes. Though the Spike appears to gather mass in the same way that a tornado would, it only "keeps" the shifting marble polyhedrons from the Astral Plane, violently projecting any foreign matter away. The shape of the total volume of the Spike's mass follows no logical pattern or symmetry, but the marble polyhedrons change shape in unison and each assume the same shape simultaneously.

Astral Spikes were first discovered by the Bureau following an incident involving an Astralnaut, a type of Bureau agent specially trained to navigate the Astral Plane and have their brainwaves turned into footage. Though the agents could only enter the Astral Plane through their minds, it was discovered to exist as an actual location, and its inhabitants could get out. One such Astral Spike "hitchhiked" a ride in Agent Mark Gibson's head to enter the Oldest House. Upon Gibson's return from the Astral Plane, it burst through his head, killing him, and went on a rampage before being contained and studied within the Astral Exhibition in the Research Sector.

This original specimen, still contained in the exhibition, is the first Astral Spike to be formally encountered by Jesse Faden when she traverses the Research Sector during the Hiss invasion. Spikes also appear in various other areas throughout the Oldest House and its connected Thresholds: 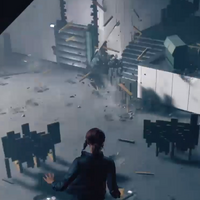