The Benicoff TV is an Object of Power contained by the Federal Bureau of Control in the Oldest House. It is the source of the Levitate ability, one of the core abilities Jesse gets in Control.

The Benicoff TV is a small cathode-ray tube television produced by Benicoff and Sons Electrics. The TV's screen still functions and usually only displays static. A label reading "радуга" (the Russian word for "rainbow") can be seen on the upper-right corner of the TV's face. When bound to a parautilitarian, the Benicoff TV gives the parautilitarian the power to levitate in midair to varying heights depending on their aptitude.[1]

Panopticon Supervisor Frederick Langston refers to the Benicoff TV as a category five OoP, noting that it is capable of causing great damage and even destroying the Panopticon if not securely contained.[2] The Benicoff TV possesses an innate ability to induce shifts in the environment of the Oldest House around it, like some other Objects of Power. The TV's screen occasionally changes to spiraling images resembling the shifts it induces.

According to its documentation, no unique procedures are required for the Benicoff TV while it is bound to a parautilitarian.

The Benicoff TV was acquired by the FBC after intercepting local news stories about a figure seen levitating over buildings in Kansas. Bureau agents dispatched to investigate found the TV in the possession of a parautilitarian who had bound it to himself; they detained the man and retrieved the Object for study in the Oldest House, where it would ultimately be contained in Fortified Unit 716 of the Panopticon.[1]

When confronted by Jesse Faden, the TV immediately reacts by dramatically warping its containment unit and several adjacent offices into a twisted corridor of shifting architecture. After dealing with the Hiss-corrupted Salvador and his team, Jesse is able to cleanse and bind the Benicoff TV to herself, returning it to containment and granting her the Levitate ability.[5] 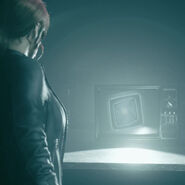 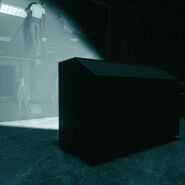 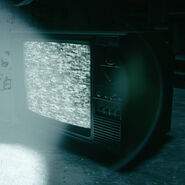