Dr. Casper Darling was the Head of Research at the Federal Bureau of Control from 1995 to 2019.[1] During his time at the FBC, he was responsible for heading research efforts into a number of paranatural topics, and supervised the investigations of multiple major Altered World Events.

Casper Darling began working for the Federal Bureau of Control in 1995.[1] During this time, he was promoted to the title of Head of Research, succeeding his predecessor, Dr. Theodore Ash, Jr. Darling was made a member of Director Zachariah Trench's personal management team, and became a close ally of Trench. As Head of Research, Darling led research of a variety of paranatural topics, including Objects of Power, Altered World Events, and the Astral Plane.

Later in his career, on the suggestion of Head of Communications Alberto Tommasi, Darling created a series of introductory videos on these paranatural topics, which were distributed throughout the Oldest House.

In 2002, the Federal Bureau of Control received reports of an Altered World Event in the town of Ordinary (see AWE-24). Trench and Darling led Bureau agents to investigate. In Ordinary, they discovered that the entire adult population of the town had disappeared, with only children remaining. Two of these children, the siblings Jesse and Dylan Faden, led the Bureau agents to a Slide Projector Object of Power in the town's dump. The agents discovered that the Slide Projector had the ability to create "doorways" to other dimensions through the slide images inside of it. The Bureau quickly took possession of the Slide Projector, also kidnapping Dylan Faden in the process. Jesse Faden escaped, burning all but one of the slides, which was also taken by the Bureau. The entire Ordinary dump site was subsequently moved to the Oldest House for study.

After being brought to the Oldest House, Dylan Faden was placed under Darling's supervision, who determined him to be a powerful parautilitarian with abilities comparable to those of former Director Broderick Northmoor. Due to his huge potential, Dylan was enlisted in Trench's Prime Candidate program as Prime Candidate 6, or "P6," and groomed to become the next Director. In spite of showing much initial promise, however, Dylan became increasingly unpredictable over time. In a particular incident, Dylan accidentally but violently killed FBC Agent Roberts with his paranatural powers.

While Helen Marshall considered Dylan to be extremely dangerous, Darling took responsibility for the incident and dismissed concerns about Dylan's volatile nature as being due to stress from the Bureau's pressure. Nonetheless, the incident resulted in increased restrictions on Dylan's freedoms, including total isolation and incessant psychological examinations. This increasingly agitated Dylan, to the point that he ultimately caused the deaths of several more Bureau agents out of anger. He was ultimately relocated to a containment cell in the Panopticon, and considered "a lost cause" by Darling.

After the recovery of the Slide Projector Object of Power and the unburnt slide, Darling and Trench orchestrated several expeditions into the only remaining dimension accessible, dubbed Slidescape-36. Slidescape-36 quickly proved to be heavily influenced by resonance, bearing "deep wave marks," and interfering with the radio and sonar equipment possessed by the Bureau. Due to some of this resonance being extremely dangerous, many of the expeditions were met with casualties. In spite of this, Darling and Trench pressed on with the expeditions, and eventually located the entity believed to be the source of the resonance in the dimension: a massive, polyhedron-shaped living organism which Darling named "Hedron."

Hedron quickly became a subject of fascination for Darling due to its unprecedented resonance frequencies, and he arranged for the entity to be relocated to the Oldest House and contained there for further study. Darling believed Hedron to be the most significant discovery in Bureau history, and devoted much of his time to understanding it. Gradually, this devolved into an obsession, and Darling began exposing himself more to Hedron's resonance, overcome by "compulsions" and "seeing things." He came to believe that Hedron was communicating with him, and that its resonance relayed not only knowledge, but protection. Through Hedron, Darling learned of what he believed was an imminent threat, a hostile resonance which the Bureau would soon be exposed to. Growing increasingly paranoid, Darling arranged for the construction of Hedron Resonance Amplifiers (HRAs) and their mandatory use by all Bureau personnel; these HRAs would enable Hedron's resonance to protect the agents from the hostile resonance.

Unbeknownst to Darling, Trench had also been exposed to a resonance in Slidescape-36, that of the Hiss, the very hostile resonance which Darling feared would invade the Bureau. Trench, oppositely to Darling, believed that Hedron was the real threat and that it had corrupted Darling and everyone else wearing an HRA, intending to take over the Bureau. In order to stop this perceived threat, Trench used one of the burned slides from Ordinary to open a doorway for the Hiss with the Slide Projector. The Hiss subsequently invaded and corrupted most of the Bureau, with the exception of those wearing HRAs. Thus, Darling's work effectively saved the entire Bureau, and possibly humanity, from the Hiss.

Darling's fate during the Hiss invasion is unknown. He does not physically appear in Control, and is instead encountered only via his video tapes. According to Darling, Hedron (and by extension Polaris) relayed to him a final message, "something wonderful", just before the invasion commenced. After protecting Hedron's chamber with a large-scale HRA, Darling locked himself inside of the chamber with the entity, preparing himself to be "blown away." Darling alluded to going on a "journey" and being made "to understand." Darling is not heard from again, except in a Hotline message relayed to Jesse Faden in her Hiss-induced dream. He is implied to have entered an entirely different plane of existence altogether.

Casper Darling is an eccentric, awkward, and generally lighthearted man who presents paranatural topics with an aura of joy and curiosity. He is extremely intelligent, and possesses an in-depth understanding of the paranatural, as well as a scientist's craving to understand the unknown. As the Hiss invasion approached, he became more paranoid, erratic, and melancholy, fearing for the future and the threat of the Hiss. Darling's ultimate compulsion appears to have been the pursuit of knowledge and understanding, leading to his willingness to leave reality altogether to explore the unknown.

Darling had an intermittent relationship with Raya Underhill. 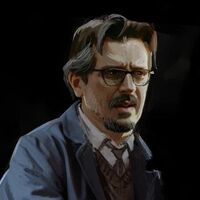