Dylan Faden (known to the FBC as Prime Candidate 6 or P6) is the younger brother of Jesse Faden and a powerful parautilitarian.

After being brought to the Oldest House, Dylan was placed under the supervision of Casper Darling, who determined him to be a powerful parautilitarian with abilities comparable to those of former Director Broderick Northmoor. Due to his huge potential, Dylan was enlisted in the Prime Candidate program as Prime Candidate 6, or "P6," and groomed to become the next Director. Implicitly, the pseudo-educational video series Threshold Kids, initially proposed by Bureau parapsychologist Bethany Harrington, was created to teach Dylan about paranatural topics.

In spite of showing much initial promise, Dylan became increasingly unpredictable over time. In a particular incident, Dylan accidentally but violently killed an agent named Roberts with his paranatural powers. While Helen Marshall considered Dylan to be extremely dangerous, Darling took responsibility for the incident and dismissed concerns about Dylan's volatile nature as being due to stress from the Bureau's pressure. Nonetheless, the incident resulted in increased restrictions on Dylan's freedoms, including total isolation and incessant psychological examinations. This increasingly agitated Dylan, to the point that he ultimately caused the deaths of several more Bureau agents out of anger. He was ultimately relocated to a containment cell in the Panopticon, and considered "a lost cause" by Darling.

During his containment in the Panopticon, Dylan remained hostile to the Bureau and its agents. He also appears to have received telepathic messages from Polaris, but rejected her and his sister Jesse out of anger for how they allegedly abandoned him in Ordinary.

In 2019, Zachariah Trench, under the influence of the Hiss, used the Slide Projector to open a doorway to the dimension of the burned slide he recovered from Ordinary. The Hiss immediately invaded the Oldest House, overtaking everyone not wearing a Hedron Resonance Amplifier. During these events, Dylan fell under the influence of the Hiss, but unlike its other victims, he appeared to retain much of his sanity and control over his own mind. Dylan regarded the Hiss as his friend and liberator, and sought to aid it in its endeavor to spread and take control over humanity.

After Jesse Faden arrived at the House under the direction of Polaris, she sought Dylan in the Containment Sector after being directed there by Helen Marshall; however, Dylan instead appeared in the Executive Sector and willingly turned himself in to the Bureau, being contained in a cell. When speaking with Jesse, Dylan continued to regard the Hiss as his ally, and expressed extreme hostility toward Polaris, claiming that she was manipulating Jesse. Throughout his dialogues with Jesse, Dylan would often recall "dreams" of his, some of which appeared to be visions of other realities and parallel universes, and continued to fantasize about the Hiss taking over the world.

Dylan instructed Jesse to go to the Prime Candidate program to learn the "horrible truth about the Bureau," though Jesse left only in search of the Slide Projector to turn it off and stop the Hiss. While Jesse was searching for the Slide Projector, Dylan escaped containment and located it in the Nostalgia Department in the Executive Sector. From there, he entered the Astral Plane with the Hiss and attempted to take control of the Board; however, Jesse arrived and purged the Hiss from Dylan, preventing it from taking control of the Astral Plane. Dylan then fell into a coma, his fate unclear. 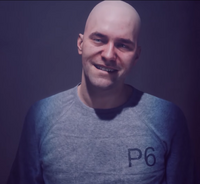 Shown during cutscene in Take Control