Doctor Emil Hartman was a psychologist from Bright Falls, Washington who was involved in the events of the Bright Falls AWE. After the FBC imprisoned him and his property, He was released, and dove into the lake. Devoured by hungry darkness. The FBC caught and imprisoned him once again. He broke free and killed everyone he could forcing an FBC retreat and the seal of the investigation sector. Later he was possessed by the hiss by choice.

At some point in his life, Hartman moved from his former home in Vermont to Bright Falls, Washington, where he became the assistant of Thomas Zane, a poet who lived in the Bright Falls area. Through Zane, Hartman discovered the power of Cauldron Lake to turn works of arts into reality, becoming obsessed with it. When Zane's lover, Barbara Jagger, mysteriously drowned in Cauldron Lake, it was Hartman who convinced Zane to use Cauldron Lake's power to write her back, with disastrous results; the Dark Presence possessed Barbara, and Zane erased himself and Barbara from reality. Years later Hartman converted the Cauldron Lake Lodge to a clinic for the ostensible purpose of helping tortured artists recover from mental health issues but in reality it was a testing area in which he attempted to use the artists to manipulate reality using Cauldron Lake.

Hartman was contacted by Alice Wake, who sought therapy for her husband Alan Wake. Hartman saw Alan as great candidate and invited them over. When Alice and Alan wake both disappeared Hartman was furious, realizing that Alan was already affecting reality. When Alan reappeared Hartman sent his lackey, Ben Mott to lure Alan back to Cauldron Lake by pretending they had Alice. When Mott was killed, Hartman took matters into his own hands, kidnapping Alan and then claiming that Alice had died and that he was having a psychotic breakdown, but Alan did not believe him and escaped. Hartman lamented the loss of his prime candidate, but continued his research.

After the events that just took place in Bright Falls, the Federal Bureau of Control investigated Bright Falls and discovered Hartman's research. While Hartman wished to form a partnership with the FBC, the Bureau found Hartman to be in violation of paranatural law, and detained him. Hartman was eventually released due to being a low level, but his research was kept by the FBC, and seeing no other option, Hartman decided to do what he had been to afraid to do before and jumped into Cauldron Lake. The FBC quickly apprehended Hartman and brought him to their headquarters, the Oldest House. Hartman was kept in Bright Falls AWE area of the investigations sector until Alice was brought for an interview. Hartman then escaped, causing the whole sector to be locked down. When the Hiss invaded the Oldest house in 2019, they met with the Dark Presence, which was of similar nature causing them both to be amplified inside of Hartman and causing him to stretch into a monstrous form. Hartman was ultimately killed by FBC Director Jesse Faden. 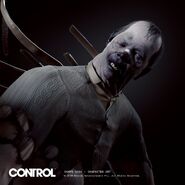 Emil Hartman as he appeared in Control

Emil Hartman as he appeared in Alan Wake
Community content is available under CC-BY-SA unless otherwise noted.
Advertisement