The Floppy Disk (OOP5-KE) is an Object of Power contained by the Federal Bureau of Control in the Oldest House. When Jesse Faden binds the Floppy Disk during the story mission Unknown Caller, it grants her the ability Launch.

The Floppy Disk is an eight-inch wide diskette capable of storing eighty kilobytes of data. The Floppy Disk possesses the paranatural ability of telekinesis and is able to lift and throw objects remotely; it is unspecified whether the object itself has limits to the strength of its ability or the maximum weight it can pick up. When the object is bound to a parautilitarian, they become able to wield this ability.[1]

The containment location of the Floppy Disk is redacted in its documentation. However, it is mandated that its containment cell must not hold any loose materials inside.

The Floppy Disk was originally property of the Soviet Union, containing launch codes for Soviet nuclear missiles reserved for use against an unspecified foreign power. The CIA stole the Disk from a Soviet military base in the 1970s and brought it to the United States for analysts to decode. At this point, the Disk suddenly began causing things to start flying around itself, throwing hardware at the analyst team. A CIA informant notified the Federal Bureau of Control, and the Disk was requisitioned by Bureau agents the next day on March 11, 1974. The FBC experimented with the Floppy Disk and determined it to be an Object of Power, binding it to Bureau parautilitarians to test its telekinetic ability.[2]

At some point after the Floppy Disk was acquired, Director Broderick Northmoor, the most powerful parautilitarian known to the FBC at that time, was able to use it to send a bowling ball six yards through the air. This was considered a major accomplishment since previously, FBC researchers had only succeeded in using the Floppy Disk to propel smaller objects like pencils and a cup over much shorter distances.[2]

According to Casper Darling, the Disk became a receptacle for paranatural energies due to personifying archetypes of the Cold War-era collective unconscious.[1]

During the Hiss invasion, the Floppy Disk was corrupted by the Hiss and broke containment. It ended up in the Pneumatics area of the Executive Sector and demonstrated much more potency, flinging metal mail canisters with lethal force, killing L. Samson and at least two other Bureau agents.[3][4] It was found and cleansed by Jesse Faden, who bound it to herself and gained its ability: Launch.[5] 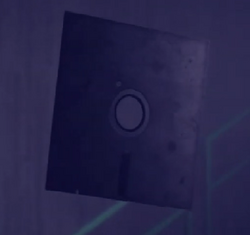 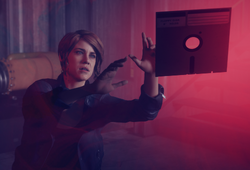