Langston's Runaways
Fridge Duty is a side mission in Control, taking place in – and outside of – the Panopticon.

Agent Phillip has been left to stare at the Refrigerator Altered Item and calls for help when Jesse Faden first comes near its containment cell. The doors to the cell are locked, Frederick Langston being the only one with the capacity to open them.

Upon returning to Langston and informing him of the situation, he explains to Jesse that the refrigerator requires constant supervision, else it will deviate. He unlocks the cell doors anyway, simply warning Jesse of what could occur were no one to keep an eye on it.

Jesse returns to the refrigerators' containment cell, though before she can rescue Phillip, the refrigerator kills him, supposedly due to him no longer being able to keep eye contact. The door opens to its cell, and a puddle of blood is left where Phillip was seated.

Upon touching the Altered Item, Jesse is transported to the Astral Plane, where she encounters the Former, a massive paranatural entity, which proceeds to attack her.

After defeating the Former, Jesse returns to the real world, the refrigerator appearing to no longer exhibit its erratic behaviour, likely due to Jesse having cleansed it of the Former's influence. On reporting to Langston, he takes the opportunity to assign to Jesse, the "Altered Item whisperer",[1] a further task.

There is a secret achievement and trophy connected to the final stage of this mission. 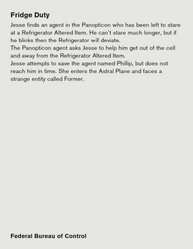