Possessed by the Hiss

Helen Marshall was the Head of Operations for the Federal Bureau of Control and a former member of Zachariah Trench's management team.

Formerly a CIA agent, Marshall later joined the Bureau and worked her way up to become its Head of Operations under Director Trench. In her role, she was responsible for overseeing the Bureau's various specialist teams that dealt with paranatural phenomena.

During the events of the Hiss invasion, she led a team of Rangers to the Research Sector in order to secure production of HRAs. However, they were separated from the rest of their allies, and Jesse Faden was tasked with locating and aiding them.

After Jesse finds her and helps secure the HRA Lab and begin production of new HRAs, Marshall informs Jesse that she has another important matter to attend to and leaves. However, Jesse and others such as Emily Pope and Simon Arish notice that she never returns, though a handful of FBC agents and documents mention she spends a lot of time in the Black Rock Quarry.

A short time after the Hiss invasion, Jesse receives a message from the Board on the Hotline urging her to travel into the Foundation to stop a new threat to the Bureau. There, Jesse is surprised to hear a new voice on the Hotline: Marshall. Worried that hearing her voice on the Hotline may indicate she met with a terrible fate, Jesse sets out to find her while repairing the Nail for the Board.

Seemingly steps behind her, Jesse pursues a figure who she believes to be Marshall throughout the Foundation, all while receiving more messages from her. Through her messages, Jesse learns that Marshall ventured to the Foundation after their meeting in Research in order to single-handedly defend it from the Hiss. She was touched to learn that Marshall trusted her to handle the Hiss in the Bureau alone while she defended the Nail in the Foundation. Jesse also learns of Marshall's doubts towards the Board. She doesn't believe the Board is as benevolent and concerned with Bureau as they say, and she suspects they were somehow connected to Trench's demise.

After repairing the Nail, Jesse is able to venture to its base only to find the Hiss standing in her way and being led by a Hiss-corrupted Marshall. Aided by Former, Jesse is able to defeat Marshall and cleanse the Nail.

After Jesse cleanses the Nail, she finds one final message from Marshall revealing she was the one who destroyed the Nail. She knew the Hiss would come for it, and she also knew it was one of the ways the Board was connected to the Oldest House. In an effort to slow the Hiss and hinder the Board's control over the Bureau, Marshall used explosives to destroy the Nail and unwittingly caused the crisis in the Foundation. Shortly after, she is ambushed by an astral spike (seemingly sent by the board to protect the nail) and her HRA is damaged. With her work done, all Marshall could do then was wait for the inevitable, quickly becoming corrupted by the Hiss. 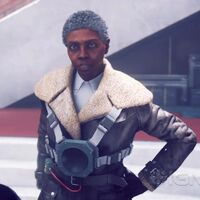