The Home Safe (OOP22-KE) is an Object of Power contained by the Federal Bureau of Control in the Oldest House. When Jesse Faden binds the OoP in the side mission A Good Defense, it grants her the ability Shield.

The object is a "Guardhouse" brand household-use safe with a rusted and scratched surface. The safe door contains a label which is partially torn off. Measurements of its weight have been inconclusive, as it differs between each test. An unknown object of organic nature is trapped inside the Safe; X-rays taken by the Bureau show that the Safe's contents are moving, and non-human blood infrequently emerges from the Safe's door seams. However, the Bureau is unable to determine what these contents are, as the Safe cannot be opened or even damaged in any way.[1]

When bound, the object allows parautilitarians to telekinetically gather items and debris from their surroundings, creating barriers amalgamated from the gathered material. Testing conducted with a Bureau parautilitarian has proven that this barrier can withstand gunfire, though Bureau testing hasn't yet cleared the Safe as a tool for combat use.[2]

The Home Safe has no unique containment procedures as specified in its documentation.

The Safe was first discovered abandoned in the basement of a home in Ohio and become popular on some online forums centered around cracking abandoned safes. The owner of the Safe was unable to crack it even with months' worth of attempts and finally resorted to the use of explosives, similarly with no effect. At this point, the Bureau confirmed the Safe's paranatural status and dispatched agents to secure it. The Home Safe was acquired by the Bureau on November 28, 2014.[1]

During the Hiss invasion, the Home Safe was corrupted by the Hiss and broke containment, ending up in the finishing area of the Ranger Field Training Course in the Maintenance Sector. Unlike previously, it was able to harness the telekinetic barrier-forming power it previously only gave to parautilitarians who bound it. Jesse Faden can optionally complete the Field Training course to bind the Home Safe, upon which she will gain the ability Shield.[3] 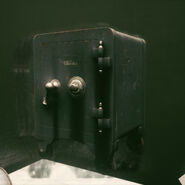