Matthew Porretta is an American actor. In Control, he portrays the character of Dr. Casper Darling. He also performs the voice of Alan Wake. 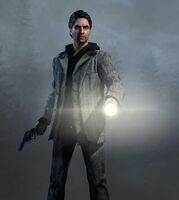 Porretta is known for his role as the voice of Alan Wake in Remedy's eponymous video game series. Finnish actor Ilkka Villi was the face of the character