The Merry-Go-Round Horse is an Object of Power contained by the Federal Bureau of Control in the Oldest House. When Jesse Faden binds to it, it grants her the ability Evade.

The Merry-Go-Round Horse is a fiberglass horse once used as a seat for a merry-go-round ride, with the pole still attached. The item is capable of moving short distances at great speeds (Evade), which can be quite dangerous when there are objects in its path.

The Merry-Go-Round Horse was originally part of a merry-go-round ride in an abandoned amusement park. Locals reported that rides would move on their own, chasing out trespassers. These rumors eventually reached the Bureau (America Overnight episode 35), which dispatched agents to investigate the site. Three locals were found dead at the scene. The Merry-Go-Round Horse itself attacked one agent before the agents invoked Formula C.5 long enough to bind the object and contain it.

The Merry-Go-Round Horse was relocated to the Panopticon in the Oldest House, where it was kept in confined containment. A few weeks before the Hiss invasion, the object escaped containment and disappeared into the Maintenance Sector, and Security Chief Simon Arish instructed agents to keep an eye out for it. During the invasion, the object was discovered by Director Jesse Faden, who bound herself to it and gained the ability Evade. 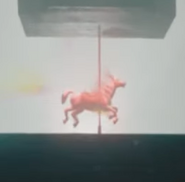 Add a photo to this gallery
Retrieved from "https://control.fandom.com/wiki/Merry-Go-Round_Horse?oldid=4726"
Community content is available under CC-BY-SA unless otherwise noted.