The Oldest House is a Place of Power located in New York City. Appearing as a featureless skyscraper of the Brutalist architectural style, the interior of the Oldest House is a space-defying, constantly shifting labyrinth connected to various alternate dimensions through spontaneously occurring Thresholds. The Board and the Astral Plane both appear to possess intrinsic connections to the Oldest House.

The Oldest House acts as the global headquarters of the Federal Bureau of Control, where the Bureau carries out research on paranatural phenomena, and contains hundreds of Altered Items and Objects of Power. On October 29, 2019, the Oldest House was invaded by a hostile paranatural force, the Hiss, which was unleashed by Bureau Director Zachariah Trench.

The origins of the Oldest House are unknown, but based on dialogue from the Board, it is possible it first emerged from the Foundation. On August 4, 1964, the Federal Bureau of Control investigated a suspected Altered World Event (AWE) case in the New York City subway tunnels, accidentally finding an entrance to the Oldest House. At this point, the skyscraper as a whole, due to its nature, became perceptible to the Bureau. Investigating the site, the Bureau eventually converted it into its headquarters, utilizing Control Points as synchronistic rituals to control the House's ever-shifting nature and establish relatively stable areas for research, containment, and bureaucracy.

The Oldest House has acted as the Bureau's headquarters for more than 55 years, during which time hundreds of Altered Items and Objects of Power were contained there for study. Due to the Oldest House's nature to evade perception by ordinary humans, the Bureau itself began to assume this paranatural property, protecting it from detection by the general populace. Under the tenure of Director Zachariah Trench, many significant additions were made to the Oldest House, including the construction of the Panopticon for Altered Item/Object of Power containment and the establishment of the Northmoor Sarcophagus Container (NSC) Power Plant, to power the entire building through the rampant paranatural abilities of former Director Broderick Northmoor. By 2019, the Oldest House consisted of five sectors: Executive, Maintenance, Containment, Research, and Investigations.

In 2002, Bureau agents recovered the Slide Projector Objects of Power from an AWE in Ordinary (see Ordinary AWE). Through the OoP, the Bureau discovered Hedron, a powerful resonance conduit, which Trench came to view as a threat to the Bureau. As a result, he unleashed the Hiss, a hostile resonance-based entity, through the Slide Projector, resulting in a total invasion of the Oldest House which was repelled largely due to the appointment of Jesse Faden as the Bureau's new Director in the wake of Trench's suicide.

The Oldest House is a Place of Power, a type of paranatural location possessing a deep and intrinsic connection to various alternate dimensions, particularly the Astral Plane. As a result, it exists outside of the ordinary laws of spacetime, and experiences constant shifts in its internal topography. The Oldest House is believed to be infinite in scale, with the area controlled by the FBC only representing an infinitesimal fraction of the Oldest House's true extent. From the outside, however, the Oldest House is a stoic Brutalist skyscraper of defined size, meaning the building is larger on the inside than on the outside.

The Oldest House possesses a property which makes it imperceptible to anyone except those who are specifically looking for it. As a result, it remained undiscovered until the Bureau found it by accident during an AWE investigation in New York City in 1964. The Bureau itself later seemingly acquired this same property, making it difficult for the general populace to find. It is unknown when the Oldest House first appeared or was created, or whether its name has any bearing to its actual age. The Board implies that it and the Oldest House share a connection through the Astral Plane, and that both originated in the Foundation, a mysterious location within the House. Because of its paranatural nature, the Oldest House - much like the Oceanview Motel - possesses connections to other dimensions in the form of Thresholds, which appear spontaneously in the building. Known Oldest House Thresholds include the Black Rock Quarry, Mold Threshold, and Clock Threshold. The Oldest House is connected to the Oceanview Motel as well as a result of the events of an AWE in Butte, Montana.

Onlythe Foundation of the Oldest House remains structurally static; the only recorded shifts occurred due to outside influences from the Hiss invasion and subsequent collision of the Astral Plane. Former Head of Research Theodore Ash noted that the global leylines run not only through the Oldest House, but seem to converge within the Foundation at the site of the Nail. Emily Pope determined that the Oldest House may predate the existence of the Nail, as the Nail is made of a foreign substance composed "of, from, or [possibly] containing" the Astral Plane itself.

After a period of extended observation, Dr. Ash speculated that the Board has exerted substantial influence over the shape, function, and character of the Oldest House, possibly co-opting and interfering with its inherent organic growth to suit their needs. Dr. Ash and other FBC agents, including Helen Marshall and Frederick Langston, noted that the House itself may exert influence over the FBC agents working within. Ash observed Director Northmoor become more arrogant, egocentric, and preoccupied with asserting control over missions and FBC personnel, while Marshall and Langston saw similar effects in both Zachariah Trench and Casper Darling who became more secretive, isolated, and concerned with pursuing the Board's agenda over the welfare of the Bureau during their extended tenures.

The Oldest House is sensitive, and can react to the presence of observation devices (for example, only shifting when in a camera's blindspot), modern technology, extra-dimensional activity or interference, and the will of powerful parautilitarians, such as the FBC Director. Due to the Hiss invasion, the corrupted influence made some sections of the Oldest House hostile to the FBC; however, many of these areas returned to regular function after being purged by Director Jesse Faden.

The Executive Sector is the control hub of the whole building, and the location of the Director's office.

The Maintenance Sector provides power and management to the rest of the building. It is also the locaton of the Black Rock Quarry Threshold and the Foundation.

The Containment Sector consists primarily of the Panopticon, an enormous chamber where hundreds of Altered Items and Objects of Power are contained and studied by the Bureau. It is also the location of research areas for specific Altered World Events.

The Research Sector is where the Bureau conducts research into a variety of paranatural topics such as parapsychology, resonance, and the Astral Plane. It is also the location of the Mold Threshold and the Dimensional Research Department, where expeditions into Slidescape-36 were conducted.

The Investigations Sector is where the Bureau carries out close examination of most Altered World Events.

The Oldest House is based on 33 Thomas Street, a skyscraper in New York built in the Brutalist architectural style. The building is reportedly home to a National Security Agency (NSA) surveillance facility. Certain in-game documents confirm that 33 Thomas Street is the location of the Oldest House, though some files state "34 Thomas Street" as well. The Oldest House's interior is based partly on the book House of Leaves by Mark Z. Danielewski, much of which takes place in the featureless, infinite, and shifting interior of a supernatural house. Sam Lake has cited House of Leaves as an influence for both Control and Remedy Entertainment's previous title Alan Wake. The Oldest House is also inspired by other U.S. government buildings of Brutalist construction, such as the J. Edgar Hoover Building in Washington D.C., the headquarters of the U.S. Federal Bureau of Investigation (FBI).

Central Executive circa Welcome to the Oldest House 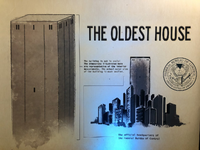