Sami Järvi, better known by his artist name Sam Lake, is the creative director of Remedy Entertainment and the chief writer of Control. He has often served as the company's public face, and is well known for his acclaimed video game narratives.

Lake began working at Remedy Entertainment by writing the in-game text for Remedy's first title, Death Rally. He went on to become the chief writer for Max Payne, and famously served as the character model for the game's titular protagonist. Lake also wrote Max Payne 2: The Fall of Max Payne, although Payne's character in this title was portrayed by Timothy Gibbs.

Lake was the chief writer for Remedy's 2010 title Alan Wake, which became a cult classic largely due to its narrative. He went on to direct the spin-off Alan Wake's American Nightmare, and was also the creative director and chief writer of Remedy's 2016 title Quantum Break.

As with Alan Wake, Lake wrote the original story for Control in isolation shortly after he and Mikael Kasurinen developed the initial concept. The story was then edited and expanded upon to create the full script for Control.

Lake has also made appearances in other media, including portraying the Veteran Porter in Hideo Kojima's 2019 video game Death Stranding. 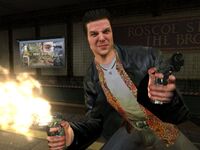