SHOTGUN
Shatter is one of the Forms of the Service Weapon. It usually becomes available for construction as the second Form, after the briefing at the start of the mission Directorial Override and by accessing the first cleansed Control Point at Central Executive or any other.

By functionality similar to a shotgun, Shatter has a wide blast radius, but a shorter effective range than Grip. Damage is calculated for each projectile. Mods can be applied to increase the number of projectiles fired and decrease their spread, giving this Weapon Form a wide range of potential efficiency.

As other Forms of the Service Weapon, Shatter can be constructed at a Control Point requiring Source and materials as listed below. If any of the components has not been collected before and is completely missing from the Loadout, the construction option will not be available.

Shatter can be upgraded twice as an Astral Construct at a Control Point when the required materials have become available to Jesse Faden. The option is shown, together with the exact numbers needed, when at least one specimen of each material has been collected and is present in the Loadout. On top of materials, Source is also consumed in the upgrade process. Each upgrade unlocks an additional Mod slot and increases the weapon's base damage.

The following Weapon Mods are exclusive to the Shatter Form: 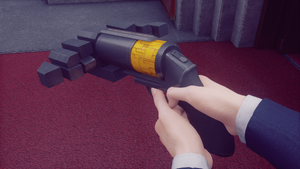