Edit
This article is a stub. You can help Control Wiki by expanding it.

Simon Arish is the security chief of the Maintenance Sector for the Federal Bureau of Control. He can be found at NSC Security in the NSC Power Plant, later at the Atlas Chamber, and finally at Central Executive.

Originally joining the Bureau as a Ranger, Arish was part of a squad with Remus, Thomson, Hazzard, Heptonstall, Guy, and Cho. The squad was dispatched to a possible AWE in progress, the 7 of them barely made it out alive and each bought a trinket to commemorate their victory, they wear these in a pouch by their neck.

After reaching rookie status, Arish transferred out of the Rangers to join security in the Maintenance Sector. Despite this, the seven remained close friends, and they routinely played in card games against each other. As of their most recent game, Arish was on a long winning streak, to the point where Remus accused him of cheating.[1]

When the Hiss invasion struck, Arish managed to survive with several members of his security team thanks to their HRAs, holding down the security office at the NSC Power Plant. His former squadmates were not as lucky, and all of them were corrupted by the Hiss throughout the Maintenance Sector. Jesse Faden can help Arish gain closure and recover his friends' trinkets by tracking down and eliminating each of his Hiss-corrupted former friends.[2]

According to Ahti, Simon Arish "is not a useless guy," one who would respect his elders and be able to make good coffee.[3] 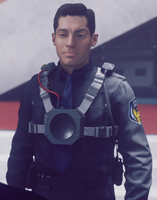