The actual appearance of the Board is unknown; like the Hiss and Polaris, they appear to lack a physical body and/or bodies, perhaps being a resonance-based intelligence. However, the implication of the Former once being a member of the Board suggests that Board members can or do possess physical bodies of some form.

The Board broadcasts messages from an enormous inverted Black Pyramid located in the Astral Plane. The Pyramid does not appear to be the board itself, but is rather under their control. Astralnauts and others using astral projection to enter the Astral Plane are always in the vicinity of the Pyramid.

Theodore Ash, Jr. made note that the Pyramid is always seen from below by observers, and speculated that there might be someone looking down on it from above. He connected this to the symbolism of triangles, and that they symbolize stability and strength standing on their base, but conflict and stagnation when inverted. Ash also associated the triangle symbolism with esotericism and theology, including its symbolic use in Christianity, but clarified that it is unlikely such theological imagery can be used to define alien entities.

The Board is a group of unseen paranatural entities which exist within the Astral Plane, an alternate dimension or "mindscape" which can be reached via astral projection through Objects of Power. The Board controls the Black Pyramid, an enormous inverted pyramid-shaped construct in the Astral Plane which is always located overhead to the observer. The Pyramid does not appear to be the Board itself, but rather an object under their control, as they are distinguished from the Pyramid on multiple occasions. Casper Darling stated that the Bureau has determined that the Board controls the Pyramid, but not the entirety of the Astral Plane.

The Board communicates via telepathic broadcasting from the Black Pyramid. While the Board's messages are auditorily incomprehensible, they can nonetheless be understood by those who receive the messages. However, these messages are often scrambled, with some words having multiple possible meanings. For example, the Board initially states that it is broadcasting from "the Pyramid," but this could also be understood as "the Other." It is unclear which meaning is the "correct" interpretation of the Board's messages, if not both. The Board appears to occasionally struggle to communicate meaningfully, possibly due to its alien intelligence or other linguistic or cognitive barriers.

Because of their connection to the Board, Objects of Power are among the only means of reaching the Astral Plane; when an individual (i.e. an Astralnaut) interacts with an O.o.P., they experience an astral projection or "dive" into the Astral Plane, a phenomenon which can be recorded by monitoring the brain activity of the individual in question.

The Board appears to have a strong connection to the Oldest House. According to Broderick Northmoor, the Board considers the Oldest House to belong to them, though this is strongly implied to be an imposed connection rather than an intrinsic one. Various areas of the Oldest House contain symbolism of the Black Pyramid, such as the Central Executive division of the Executive Sector.

The Board is believed to be tethered to the Oldest House through The Nail, a paranatural pillar located in the Foundation. Theodore Ash, Jr. was convinced by his meetings with Former that The Board's relationship with the Oldest House was essentially parasitic.

Director of the Federal Bureau of Control

The first Director chosen by the Board was Broderick Northmoor, followed by Zachariah Trench and Jesse Faden. Northmoor in particular was instrumental in making the Board a central power in the operations of the Federal Bureau of Control, including its depiction in the FBC seal. 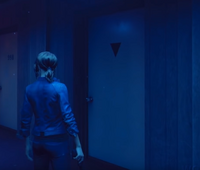 The Black Pyramid room in the Oceanview Motel (demo) 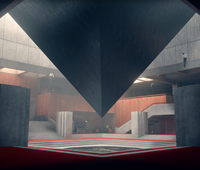 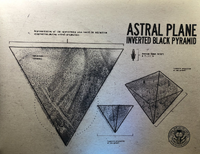