Director of the Federal Bureau of Control

Zachariah Trench was the Director of the Federal Bureau of Control succeeding Broderick Northmoor. During his tenure, Trench oversaw significant changes in the Bureau's infrastructure and management. After his death in 2019, he was succeeded by Jesse Faden.

Zachariah Trench began his career in law enforcement, and ultimately worked his way up the ranks to becoming a field agent of the Federal Bureau of Control under the tenure of Director Broderick Northmoor. During his career, Trench investigated a number of Altered World Events around the country. He was a diligent, hardworking, and modest agent, who, in his own words, never desired or trusted power, going out of his way to avoid it. This contrasted sharply with Director Northmoor, who was obsessed with power, "a man like an explosion, hungry for authority, for order, for more." As a result, Trench often followed "his own orders," resulting in Northmoor developing a hatred for him. Trench also befriended Dr. Casper Darling, a Bureau scientist, and would later consider him to be his closest friend.

Early in his career, Trench had a wife, Kate, and a daughter, Susanna. Due to what Trench later viewed as a lack of caution and security, he accidentally "took work home," which resulted in Susanna falling ill. Trench, realizing his mistake, wished to bring Susanna to the Oldest House to see if Darling could help her. However, Kate refused to allow Susanna to be cared for by the FBC, and she was instead brought to civilian doctors, who were unable to help due to the paranatural nature of Susanna's illness. She subsequently died, and Kate subsequently divorced Trench. Trench, traumatized by these events, was left with nothing but the FBC, and thus dedicated the rest of his life to the Bureau and its safety.

Over time, Director Northmoor began to lose control of his paranatural abilities due to his obsession with power. Trench ultimately proposed a solution to the issue by suggesting that Northmoor be contained in a secure chamber in the Maintenance Sector and act as a power source for the entire Oldest House. In spite of his loathing for Trench, Northmoor agreed, largely due to having no choice in the matter. The Northmoor Sarcophagus Chamber (NSC) was subsequently built in the Maintenance Sector, and Northmoor was contained there.

Following these events, the Bureau was placed in a brief crisis without the Director. Trench, who felt he had nothing to lose, picked up the Service Weapon "almost on a dare." He was subsequently selected by the Board to become the new Director of the Federal Bureau of Control.

Director of the FBC[]

Trench took his role as Director seriously, wanting to do for the Bureau what he could not do for his family, and thus resolved to keep the Oldest House safe from all threats. Unlike Northmoor, who had obsessed over gaining power from the paranatural, Trench's distrust of power and fear of the paranatural forces that had killed his daughter led to him focusing his career as the FBC's Director on implementing new security measures. He came to believe in the importance of the connection between the Director and the Bureau, regarding them as entirely dependent on one another. He later recalled that he "had to lose everything to see that the Bureau is the Director's life."

Among the changes he implemented, Trench oversaw the construction of the Panopticon, a chamber in the Containment Sector built to contain Altered Items and Objects of Power. He also implemented an internal lockdown protocol which would separate sectors from one another, preventing the catastrophic spread of paranatural phenomena. This lockdown could only be lifted by the Director using the Service Weapon, reinforcing the importance of the Director's role and ensuring that the Director would remain "the last line of defense." Trench also implemented the lockdown to ensure that failing the Bureau would be on his shoulders alone, as he did not like relying on others. Nonetheless, Trench saw the importance of having allies and knew he could not keep the paranatural contained alone, and so created a management team consisting of Casper Darling, Lin Salvador, Alberto Tommasi, and Helen Marshall to aid him in his operations.

Trench also redoubled Bureau efforts to find a candidate for the next Director, not wanting the Bureau to endure another crisis like that which occurred with Northmoor. Trench created the Prime Candidate program seeking to identify parautilitarians with the potential to become Director, but Prime Candidates 1 through 5 were all, in Trench's words, "false leads, dead ends and disappointments."

On September 14, 2002, the FBC received reports of a major Altered World Event in the town of Ordinary. Trench and Darling led a team to investigate, finding that almost the entirety of the town's adult population had disappeared without explanation. The agents encountered two children, siblings Jesse and Dylan Faden, who led them to a Slide Projector Object of Power which they said was responsible for the AWE. The Projector possessed the ability to open physical doorways to other dimensions corresponding to its slides; however, all but one of the slides had been burned by Jesse after entities from one of the slide dimensions caused Ordinary's adults to disappear. The Bureau kidnapped Dylan Faden, but Jesse escaped. Subsequently, the Slide Projector, Dylan, and the entirety of the Ordinary dump site were relocated to the Oldest House. While seven slides were recovered by the Bureau, Trench has also kept an eighth, burned slide in his personal possession.

Dylan was identified as a powerful parautilitarian and placed under the care of Darling, becoming the sixth Prime Candidate in the Prime Candidate Program. Jesse Faden was also placed in the Prime Candidate program as Prime Candidate 7, and monitored covertly by the Bureau. Trench decided to remain hands-off with Dylan's upbringing, as he did not wish to fail Dylan the way he had failed his family. However, Dylan grew increasingly erratic and dangerous, and his paranatural powers ultimately resulted in the deaths of several agents. While Darling initially dismissed concerns about Dylan raised by others, including Marshall, Dylan's volatile nature was ultimately deemed too dangerous to control. He was considered to be a lost cause, and locked away in the Panopticon, leaving Jesse the only viable candidate for Director.

Darling established a new department, Dimensional Research, in the Research Sector for the purpose of studying the Slide Projector. Trench and Darling then organized expeditions into the only surviving slide dimension. Trench participated in these expeditions, in spite of others warning him of the danger, out of a desire to escape his troubled thoughts and find meaning in the Ordinary AWE. Inside the slide dimension, dubbed Slidescape-36, they discovered an ubiquitous and intense field of unpredictable resonance (Polaris) which proved deadly for some of the rangers on the expedition. During one of these expeditions, Trench heard what he believed to be a different resonance, which he described as "A sound, like a needle, drilling in, cutting through the containment suit, reverberating in the base of my skull, my whole being." Darling dismissed this, stating that Bureau equipment and Trench's medical tests showed nothing amiss, and no other resonances were detected in Slidescape-36.

On the third expedition into Slidescape-36, the Bureau finally located the apparent source of the resonance in Slidescape-36, an enormous living entity which Darling named "Hedron" due to its geometric shape. Hedron was subsequently relocated to the Research Sector, and deemed to be of huge significance by Darling for its unique resonance and intelligence. In spite of his aversion to Objects of Power, Trench bound himself to the Ashtray and Cigarette Objects of Power to create the Ashtray Maze, an elaborate labyrinth only transversible by the binder and those the binder permits. This created an effectively impenetrable barrier between the Dimensional Research division and the rest of the Oldest House, protecting Hedron from possible containment breaching.

Trench grew increasingly weary of his role at the Bureau over time, describing it as an "endless grind." He did not feel at home in his own residence, and became melancholy over his repetitive daily routine at the Oldest House. He would occasionally visit the Oceanview Motel in order to "breathe easier for a while," as the Motel reminded him of many motels he had stayed at during his days as a field agent. This weariness eventually grew into exhaustion, uncertainty, anxiety, and dementia.

Through the influence of the resonance he had been exposed to in Slidescape-36, Trench began to grow concerned over what he believed to be an approaching threat to the Bureau. He became suspicious of Hedron, which he began to see as a danger to the Bureau, and these suspicions in turn extended to Bureau agents who had been influenced by Hedron. This was especially the case with Darling, who had become obsessed with Hedron and was openly exposing himself to its resonance; Trench soon began to believe that Darling had been compromised. Trench contemplated speaking to the Board about his fears, as he regarded the Hotline as his only secure line of communication, all others being compromised by Hedron.

Gradually, Trench became certain of the threat to the Bureau and what was at stake, and resolved to stop it and protect the Bureau at all costs. However, he remained uncertain of his ability to go through with what he believed needed to be done, calling himself old, weak, and afraid. The final turning point was when Darling, himself believing in an imminent threat to the Bureau, mandated the construction of Hedron Resonance Amplifiers (HRAs) to protect Bureau agents from hostile resonance through the amplification of Hedron's. Trench forbade the agents from wearing HRAs, but many did so regardless. Trench became convinced that the entire Bureau had turned against him, all of the agents corrupted by the Hedron being either dead or "monsters." Trench viewed the resonance from Slidescape-36, which Jesse Faden later called "the Hiss," as his only remaining ally. Trench believed the Hiss to be benign, and that it would protect the Bureau and act the salvation of his painful life.

On October 29, 2019, Trench resolved to rescue the Bureau by unleashing the Hiss to "save us all." He stole the Slide Projector from the Dimensional Research department and brought it to the Nostalgia Department in the Executive Sector, where he activated it using the burned slide he took from Ordinary. The Hiss subsequently spread throughout the Oldest House, corrupting all agents not wearing HRAs and turning them hostile. The Hiss took over various Control Points in the building, resulting in Trench's internal lockdown being initiated, cutting off the sectors from one another.

Trench, having completed his task, seemingly committed suicide[1] in his office using the Service Weapon. His body was found by Jesse Faden upon her arrival at the Oldest House, and the Board selected her as the next Director. The remnants of Trench's presence would relay messages to Jesse through the Hotline as she began efforts to undo the destruction caused by the Hiss. 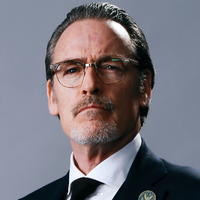